Over $15,000 was raised by Woodvale Baptist Church for anti- trafficking enterprise, Every Daughter Matters, at a fundraising dinner on Saturday 15 May. 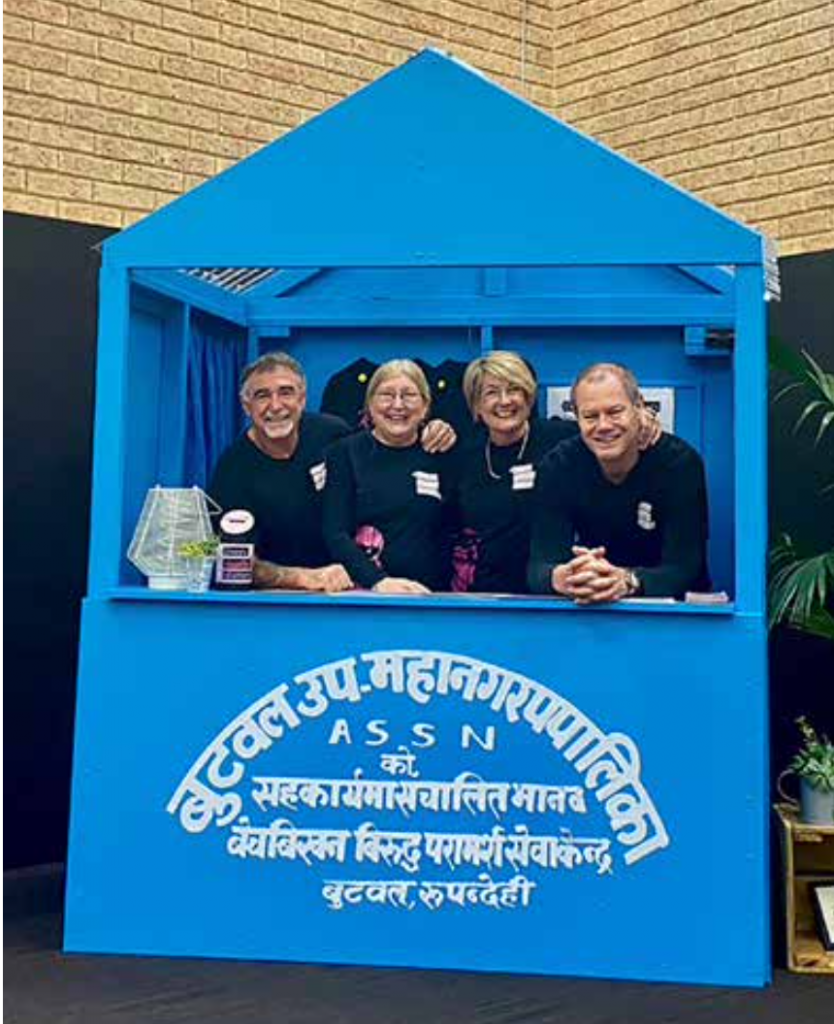 Ross and Donna Nancarrow with Karen and Rob Furlong in a replica rescue booth constructed for an anti-trafficking fundraising event.

Every Daughter Matters (EDM) is the anti-trafficking arm of International Mission Ministries, a missions partnership led by Ross Nancarrow, working with Nepali pastors for the past seven years.

“The 1,758 kilometre border between Nepal and India is one of the busiest human trafficking gateways in the world, and because many Nepali girls and women are born into poverty and also regarded by their culture as being of little value, they are at enormous risk of being lured or sold into a lifetime of hell,” Ross said.

EDM partners with the Nepali- based Aashish (Blessings) Social Service, a Christian organisation that exists to rescue young, vulnerable Nepalese women from a life of sexual slavery. Their strategy is simple: a booth staffed by trained counsellors operates at a bus depot and the workers seek to intercept, rescue and counsel women who are at risk of being preyed upon by traffickers. Currently, EDM has four booths on this border.

Over 130 people attended the dinner, including the Federal Member for Cowan, Dr Anne Aly and her husband, David. Organiser of the event,Karen Furlong, said that by partnering with the Himalayan Nepalese Restaurant and Cafe Inglewood for the night they were also able to develop a connection with the Nepalese communityin Perth.

“The restaurant owner was so moved by what EDM is doing that he has decided to promote the ministry through his restaurants,” Karen said.

“With every dollar [raised] going to EDM, it will contribute enormously to the rescuing
of many precious women in Nepal from the evil that is sexual slavery.” Founder of EDM,
Ross Nancarrow was the guest speaker at the dinner.

Ross isa passionate advocate for the women of Nepal. “We believe every daughter is priceless and is deserving of respect, dignity and value, therefore, we are committed to seeing the trade of young Nepali women and girls across the border into India interrupted and ultimately eradicated,” Ross said, as he explained the reason behind EDM.

Ross closed with a passionate appeal to those present: “Partnering with EDM will bring hope and healing to Nepal’s daughters through the potential of interrupting and assisting hundreds of girls each month – how can we not take a stand against such evil?”